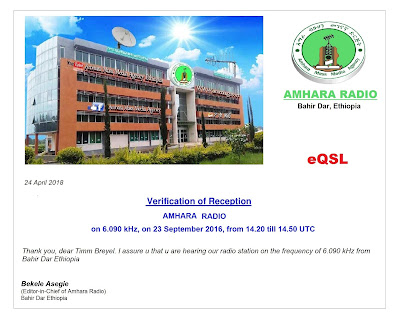 Amhara Radio, transmitting from Bahir Dar (Ethiopia), was logged on 23 September 2016. Horn of Africa music and commentary in Amharic was noted from 14.20 till 14.45 UTC (sign-on at 14,00 UTC). Reception on 6.090 kHz was (SINPO) 24331 -- poor signal strength, audible speech and music, but largely indecipherable after 14.35 UTC. Slight fade and transmitter hum as well as atmospheric noise plagued much of the broadcast. By 14.40 UTC, audio gradually dropped off and a dominant carrier signal was present. 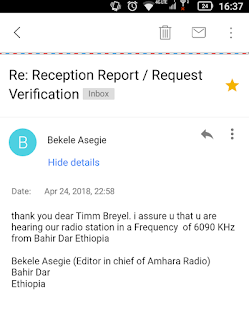 Reception report with an audio file was submitted online and Facebook messaged. An email verifying reception was received on 26 January 2017. Unfortunately this confirmation I later learned from Ralph Perry, a DXer in the US, was incorrectly QSLed by Voice of Amhara Radio, a US-funded clandestine broadcaster whose programming is relayed over rental transmitters, not in Bahir Dar, Ethiopia.

On 22 April 2018, István Hegedüs, a DXer in Hungary,  advised I resubmit my report to a Mr. Bekele Asegie at Amhara Radio, who indeed confirmed with an email on 24 April 2018. The above PPC is based on this email. Thank you, István and Mr. Bekele Asegie.