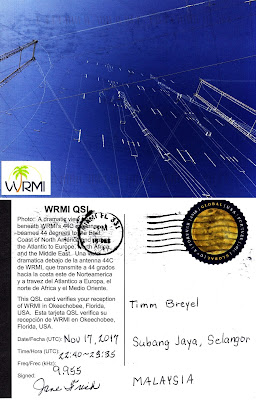 Las Noches con Mirka via WRMI was received from 22.40 till 23.00 UTC, on 17 November 2017. Transmission on 9.955 kHz rated a SINPO of 35343 -- fair signal strength and clear audio which remained so until this programme of Cuban, Caribbean and Spanish language songs ended at the top of the hour with Jeff White's announcement of WRMI ID.

PCJ Radio via WRMI was received from 23.00 up until 23.35 UTC, on 17 November 2017. While clarity of content was lacking a bit, as the grey-line between Miami and Kuala Lumpur was just beginning to close. I did manage to detect mention of a 'special' PCJ broadcast, an interview with a former PCJ announcer -- my guess is Tom Meier, a couple of light jazz tunes and the Eddie Startz signature song "A Nice Cup of Tea". Overall, from 23.00 till 23.10 UTC, SINPO on 9.955 kHz rated 35343 -- fair signal strength and clear audio. Ten minutes into the broadcast, reception gradually deteriorated with increased atmospheric noise to 24222. By 23.30 UTC, audio and atmospheric noise were mixing at equal strength, making content difficult to decipher. HERE's an idea of how WRMI sounded at around 23.00 UTC.

Reception report was emailed to WRMI ans PCJ Radio the following day. A QSL for both programmes arrived in the mail on 13 January 2018.