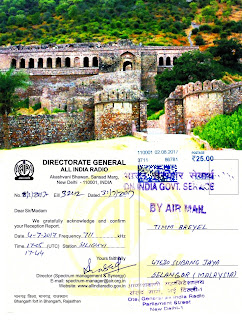 All India Radio Siliguri (Akashvani Siliguri) in West Bengal was heard broadcasting classical Indian music followed by news in English and Hindi was observed from 17.05 till 17.44 UTC, on 4 July 2017. Reception on the medium-wave frequency of 711 kHz was (SINPO) 34323 -- poor to fair signal strength when not fading under atmospheric noise or mixing with a Thai station, every two to four minutes. HERE's a excerpt from the AIR Siliguri transmission.

Reception was emailed and posted to Spectrum Management & Synergy on the following day. QSL card arrived in the mail on 10 August 2017.  Interestingly, nearly a year later, on 29 June 2018, I received another QSL card for the same report. The funny thing is it was postmark July 2017 when it left India. Either the Indian or Malaysian postal service slipped up on its delivery. I suspect the later, as much of my promised mail is being delivered on time or not at all. 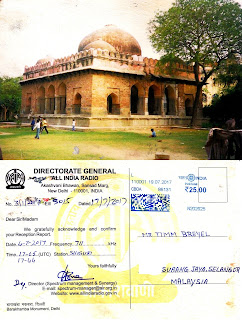