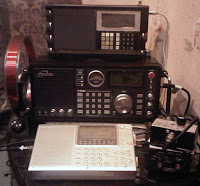 ABC Sydney (Station 2BL) was received on the medium-wave frequency of 702 kHz. The programmes "Overnights" with Rod Quinn and ABC National News & Weather was heard from 18.04 till 19.05 UTC. Reception during this time was (SINPO) 24321 -- weak signal and occasionally buried in atmospheric noise and scratchy static burst from a local thunderstorm. Signal faded in and out approximately every two to three minutes, sometimes with discernible content. Signal was detected as early as 17.15 UTC, but it was barely audible on an otherwise clear frequency.

TBS Radio Ltd - JOKR, transmitting from Tokyo, was received on 9 January 2017. A selection of (presumably) traditional Japanese music with vocal accompaniment was observed from 17.55 till 18.25 UTC (02.55 till 03.25 Japan Time). Reception on the medium wave frequency of 954 kHz was (SINPO) 25421 -- poor signal when not fading every three to four minutes. Despite these conditions content was audible, given there was no co-frequency interference at the time. Reception was best from 17.55 till about 18.10 UTC.

SSB Weather Station in Taiwan was logged on 5.170 kHz in SSB with a SINPO of 24432 at 18.20 UTC, providing weather and shipping details in Taiwan