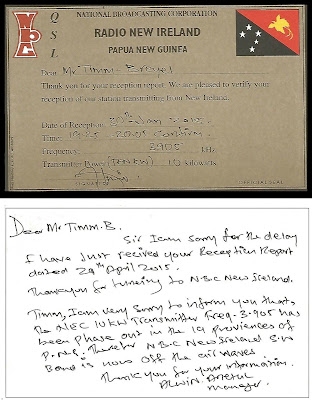 SWEET SUCCESS, FINALLY!!! This fantastic QSL from NBC Radio New Ireland (Singaut Bilong Drongo), transmitting from Kavieng, New Ireland, Papua New Guinea. After first hearing the station in 2012 and attempting numerous times to obtain their verification NBC Radio New Ireland replied on 29 July 2015. At the same time -- on the reverse side of the card --  I was informed the station's shortwave service was recently phased out. So, while I am deeply disheartened on the one hand, I am doubly delighted on the other hand to receive this long awaited QSL.

AND, it was not an easy QSL to acquire, unlike other Papua New Guinea stations. Countless emails, letters, registered letters and Facebook messages to NBC and Radio New Ireland were sent over the years. Always, just when it seemed a QSL was imminent, the key person (usually the station manager) failed to follow-up and verify.

THANK YOU VERY MUCH for this exceptional QSL and your many years of shortwave service. You will be missed.