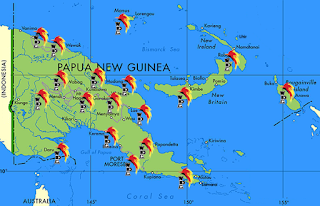 Recently I learned the 10 kW shortwave transmitter of NBC Radio New Ireland in Kavieng, PNG would be phased out.

For many years the station operated on 3.905 kHz, and could be heard occasionally outside New Ireland in regions as far flung as North America, South America, Asia and Europe. I noticed a few months back that  their signal had disappeared, here in South East Asia, and I had thought it was perhaps a seasonal anomaly.

When I received a QSL from Radio New Ireland, just a few days ago, it was the first news I had heard of their imminent closure. On learning this I contacted Michael Samuga, NBC Provincial Radio Network Manager, to enquire about NBC's future plans for Radio New Ireland.

He had this to say about the SW transmitter at Radio New Ireland, "Unfortunately our SW Tx in Kavieng has finally succumbed to age and lack of parts. NBC already has plans to bring back our SW service both on National and Provincial front, but the cost is pretty much a challenge which we will furnish to government for funding on a phased basis. The new SW Tx we are looking at are DRM compatible. As I've said, it's still in plan and I am in no position to give you a timeline".

Hopefully, Radio New Ireland will indeed return to shortwave in the near future, with not only a much stronger signal but for many more years to come.