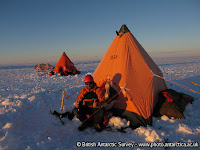 BBC World Service - British Antarctic Survey (BAS) Annual Broadcast to BAS staff in Antarctica on midwinter's day will be 21 June 2015, 21.30 to 22.00 UTC. This date marks the longest, darkest day in the Antarctic, during which the BBC will play music requests and send special messages to the BAS team.

HERE is a sound file of the broadcast monitored in central Malaysia, using the frequency 5.985 kHz via Woofferton at 21.30 UTC.