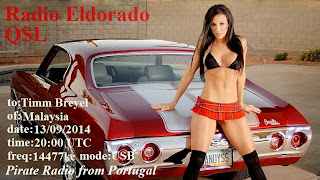 Radio Eldorado*, transmitting from Portugal, was logged on 13 September 2014. A selection of Oldies Rock-n-Roll, including "Oh, My Angel", "Why Did You Say Good-bye", "Love You Tenderly" and station ID  "Radio Eldorado One Four Four Seven Seven", was observed from 20.00 to 20.27 UTC. Reception on 14.477 kHz in USB mode was (SINPO) 34423 -- fair signal strength and clear audible. Long fades were the only major reception fault.

Reception report was submitted on 13 September 2014. After several months, an eQSL from Radio Eldorado was received on 8 May 2015.


*Logged using a remote SDR receiver at the University of Twente, the Netherlands
Posted by T.L. Breyel at 5:25 PM