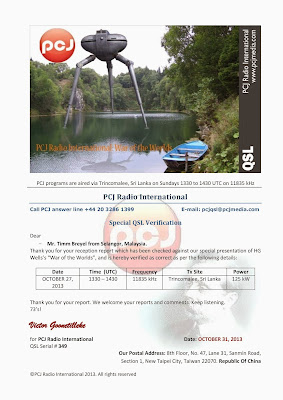 PCJ Radio International, transmitting from Trincomalee, Sri Lanka, aired a special broadcast of Orson Welles classic radio play of  H.G. Welles' "War of the Worlds" on 27 October 2013. Reception on 11.835 kHz from Trincomalee, between 13.30 to 14.30 UTC, was very good, like many of the previous transmissions from this site. Reception between 13.30 to 14.00 was (SINPO) 55445 -- excellent signal strength and good audio clarity despite slight transmitter hum and flutter. This disturbance settled after 14.00 UTC, improving reception to a solid 55555.

To provide an idea of reception in South East Asia of this classic Halloween radio play a snippet of the PCJ Radio transmission may be heard HERE.

Reception report was emailed on 28 October 2013 to PCJ Media/Radio International. This special QSL commemorating the broadcast of H.G. Well's "War of the Worlds" was received by email on 31 October 2013. Love the card -- Martian invasion of Trincomalee. Trick or treat?!