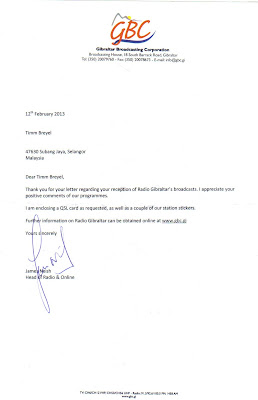 Radio Gibraltar FM (Gibraltar Broadcasting Corporation) was logged on 4 November 2012. An English language broadcast of  BBC world News, advertisements, station IDs and pop tunes -- some English and Spanish --from the '80s, 90s and present was monitored from 09.50 to 10.35 UTC. Internet stream was steady at 64 kps in MP3 format, using Apple iPod Touch with Tunin Radio application.

Reception report was emailed to GBC on the same day with follow-ups. A letter, GBC stickers and GBC lanyard was received on 27 February 2013. Although a QSL letter was mentioned, one was not enclosed. I suppose this is an acknowledgement of a verification.