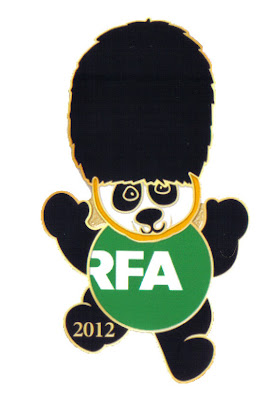 Radio Free Asia, transmitting presumedly from  Kuwait, was logged on  1 July 2012. A Tibetan (Amdo) language broadcast of news reports was heard from 02.00 to 02.30 UTC on 11.745 kHz. Reception (SINPO) was 22442 -- weak signal strength coupled with strong interference from CRI in China who mirrored and blanketed this transmission and  other RFA frequencies. Despite these conditions, speech was faintly audible.
Reception report was emailed to RFA on same day as broadcast. This QSL card commemorating the 2012 Olympic Games in London arrived in the mail on 20 July 2012.