Radio Fly in Kiunga, Papua New Guinea was received on 19 March 2012. An English language broadcast of contemporary pop music, moderated by a male announcer, was observed  from 19.45 to 20.45 UTC. Transmission was heard on 3.915 kHz. Reception (SINPO) at 19.45 UTC was 13221 -- weak signal strength coupled with some adjacent jamming, severe atmospheric noise and occasional fading. Despite the mess, audio was detected, audible and clear at times. Reception improved slightly after 20.10 UTC when there was less atmospheric noise and jamming. At 21.00 UTC, BBC in Kranji, Singapore overpowered this 1 kW station.
I'm pretty excited to FINALLY hear this station!  After nearly a year of waiting, during the wee hours of the morning, through either atmospheric noise, jamming and interference from a nearby North Korean station, or -- as was often the case -- the combination of all these factors, I caught this rare gem. 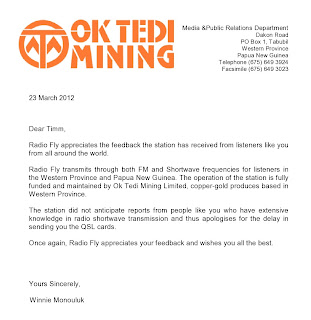 Reception report was emailed. On 22 March 2012, Winnie Monouluk of Radio Fly sent this email: "Thank you! I will be sending you a QSL card shortly." An eQSL card and cover letter from Winnie Monouluk arrived on 23 March 2012.