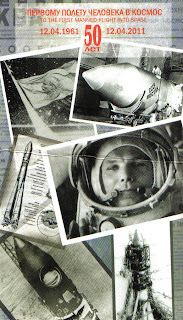 Voice of Russia, transmitting from Dushanbe-Yangiyul, Tajikistan, was received on 25 October 2011. An English language broadcast was observed from 17.00 to 18.00 UTC on 4.975 kHz. Signal (SINPO): 13332 -- weak signal marred by transmitter modulation, static and slight fading. Reception worsened to 12221 after 17.25 UTC  due to increased static and poor signal strength.
Reception report was emailed to VOR and Elena Osipova promptly responded stating that the report was correct and a QSL card would be issued. QSL card arrived in the mail on 9 November 2011. 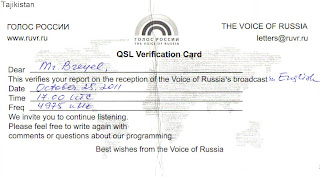