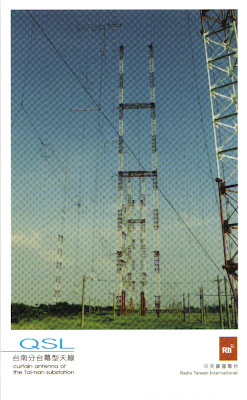 Radio Taiwan International, transmitting from Tainan, was heard broadcasting in German on 8, 9 and 14 October 2011 from 17.00 to 18.00 UTC (monitored 17.40 to 18.00 UTC and 17.10 to 18.00 UTC) on 9.955 kHz. Signal (SINPO) was 45544 -- good signal strength with some static in this region of Asia. On 9 and 14 October 2011, the transmission was jammed at 17.35 UTC.
A Special 25th Anniversary QSL Card from RTI will be issued for this limited German language broadcast, but only for those submitting reports for this particular frequency and for 7 designated days in the month of October. It commemorates RTI's German language programmes which have aired for 25 years. Reception reports were submitted to deutsch@rti.org.tw. QSL card arrived in the mail on 3 November 2011. Note the rubber stamp mark on the back of the card, stating "25 Jahre Deutsches Programme" (25 Years of German Programming).