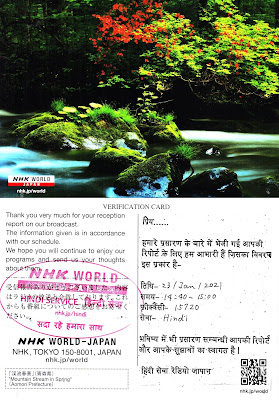 NHK World Radio Japan,  transmitting from Talata-Volonondry, Madagascar, was logged on 23 January 2021. A Hindi language broadcast was monitored from 14.40 till 15.00 UTC. Reception on  15.720 kHz rated a SINPO of 45444 -- good signal strength, clear content despite moderate atmospheric noise and slight fade. Transmission strength weakened suddenly after 14.55 as though power had been reduced or antenna beam had been switched off -- odd decrease in strength, nevertheless.
Reception report was emailed a few days later. A promise of QSL card was stated in an email in February, but due to Covid-19 delays in mail service I did nit receive the verification until 24 September 2021.
RX: Alinco DX-R8T ANT: Passive Loop QTH: Malaysia
Posted by T.L. Breyel at 3:36 AM