Voice of the Islamic Republic of Iran 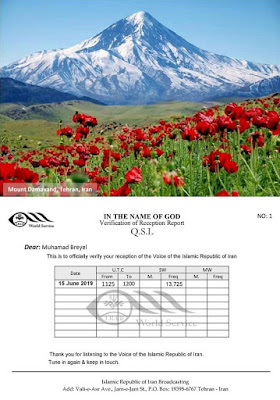 The Voice of the Islamic Republic of Iran (IRIB), transmitting from Sirjan, was logged on 15 June 2019. Dari language broadcast of religious talks and music was monitored from 11.25 till 12.10 UTC. Reception on 13.725 kHz initially rated a SINPO of 43434 -- fair to good signal, station spatter from adjacent frequencies, slight fading and atmospheric noise. Reception worsened after 11.45 UTC with increased station splatter and atmospheric noise. After 12.00 UTC, signal was much weaker, but with no station splatter and reduced noise.
HERE  is IRIB Dari

Reception report was emailed the following day and in subsequent months. Finally, on 12 June 2021 an eQSL was received.  The verifier stated that Customs in some countries had returned paper QSL and other material, so instead an eQSL was sent.