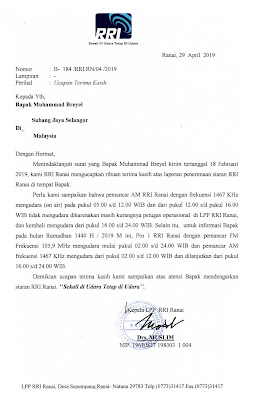 Radio Republik Indonesia Ranai PRO-1, transmitting from Natuna Regency archipelago in the Riau Islands, was logged during the second week of  February 2019.

Signal was consistently detected around 11.45 UTC with Indo pop music, followed by a female DJ and time pips at 12.00 UTC, then an ID leading into news. Co-frequency interference from dominant Thai station (National Education Radio, Pathum Thani Province), also on the same frequency, was observed, but less noticeable when radio was rotated to an east-west direction. Signal continued to be heard after 12.30 UTC, but by this time it was much weaker between long fades. After 13.00 UTC, there was barely a whisper. And after 15.45 UTC, only All India Radio Jeypore and the above mentioned Thai station was received. 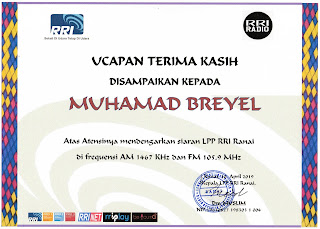 Reception report was posted to RRI Ranai, and surprisingly they replied. And I'm busting buttons, tooting horns to have received this verification. I'm immensely thankful to have caught this rare 10 kW station in a truly exotic location. Thank you, Mauno, and thank you, Dr. Muslim at RRI Ranai.

HERE's an audio clip from this transmission.