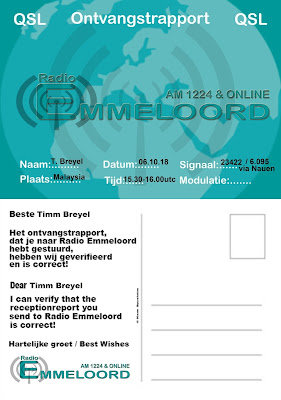 Radio Emmeloord via Media Broadcasting Gmbh (Nauen, Germany) was heard during their special broadcast on 6 October 2018. A broadcast of oldies, including The Hollies "On A Carousel", The Doors "Light My Fire", Itchycoo Park "It's All Too Beautiful", Bob Dylan, Engelbert Humperdinck and more, along with various Dutch announcers was received between 15.30 till 16.00 UTC (broadcast time 10.00 till 16.00 UTC). Reception on the short-wave frequency of 6.095 kHz, here in the Kuala Lumpur area, rated a SINPO of 23422 with lots of station splatter, slight fading, yet audio and occasionally clear content was observed. HERE is a very noisy Radio Emmeloord with The Doors "Light My Fire" and DJ chatting.

Reception report was emailed and posted online at Radio Emmeloord on the following day. DJs Dick Offringa and Hans Spoelstra, who were heard during this broadcast, replied to my abbreviated reception report on Facebook with emoticons (😮 and 👍). I'm not sure what it all means. Will they QSL? Or is this just a cursory acknowledgement? I did however notice a blank QSL card linked to DJ Dave Royal's Twitter account. The thing is no one wants to go out on a limb and state whether QSLs will be issued. Media Broadcasting Gmbh was also emailed a few days later. To date, no word has come from them either. It seems such a waste to spend so much money on logistics and SW air time, then not send at least an email to confirm. Oh well, we'll have to wait and see, I guess. Who knows? 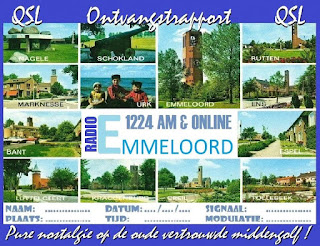 Since posting this I have learned Dick Offringa has at least 100 QSL cards to fill out. So, hopefully a verification from Radio Emmeloord will appear in the mail soon. Well, the above eCards were received on 7 November 2018. None were properly completed, so I took the liberty to include the data for future reference. It's not quite the paper verification I had hoped for, but this eQSL is close enough.