Radio 4KZ in Innisfail, Queensland (Australia) was logged on 28 September 2018 (29 September 2018, Aussie date). Country & Western music was observed briefly, including a track from Dolly Parton entitled "Over & Out", which was followed by station ID "...4KZ..." and monologue from presumably The Breakfast Show host Glenn Johns. Broadcast was monitored from 20.10 till 20.30 UTC. Transmission on 5.055 kHz radiated well enough that at around 20.10 UTC audio gained strength and peaked after about 10 minutes, producing a SINPO of 25321. HERE is an audio excerpt from this broadcast.

Reception report was emailed on the following day. After a few follow-up emails, Al Kirton, Station Manager for Radio 4KZ, replied  on 2 October 2018 with an email stating a QSL card would be sent.

Now, this verification is especially gratifying given the history to obtain it. Back in 2017 when Radio 4KZ was testing at 500 watts, their signal generally produced a predominant carrier. Occasionally audio would break through, although faint and buried in atmospheric noise. Five or six reception reports were sent to Al Kirton, thinking the attached audio files would be sufficient to merit his verification. Nope. Nah dah. None were verifiable due to the poor nature of the recordings. 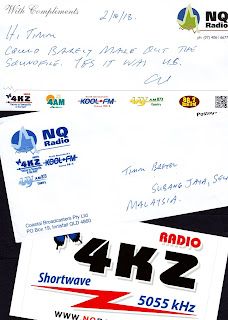 To make matters worse, Radio 4KZ reduced their transmitter power from 500 watts to 300 watts, then went off air briefly while they obtained a transmitter part. When the station returned and powered up to 1.2kW, the operating hours had changed. Instead of transmitting 24/7, the station began operating from 20.00 till 14.00 UTC. This complicated reception in South East Asia, making it almost impossible to receive the station for two reasons: firstly, Voice of Beibu Bay in Nanning operated on 5.050 kHz, causing tremendous station splatter which virtually nulled reception of Radio 4KZ; and secondly, propagation before sign-on of Voice of Beibu Bay was usually plagued by atmospheric noise, eliminating any chance of reception.

Not to be deterred, I tuned into Radio 4KZ during the month of September 2018, knowing my only window of reception might be just after sign-on at 20.00 UTC. Sure enough, a strong carrier was consistently detected between 20.00 till 20.35 UTC. Audio usually floated in between 20.10 until 20.20 UTC, but never good enough to be considered verifiable. Then, BINGO!, on 28 September 2018, as I patiently waited to click on the recorder, audio picked up and a decent recording was made before Radio 4KZ's carrier returned and faded into atmospheric noise.

Needless to say, Radio 4KZ is one of those prized QSLs, not so much for its novelty as a low-powered station in a remote area of the world, but rather because it  was such a long and laboured station to verify. Thanks for the verification, Al!