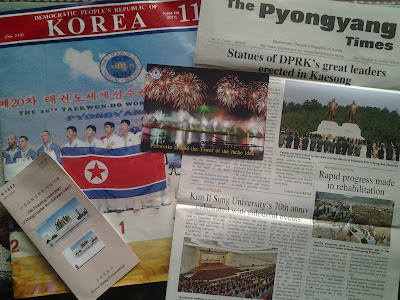 These souvenir items from the Voice of Korea  in the DPRK (North Korea) arrived in the mail just before the start of the New Year.  They included an A3 size magazine full of colourful pictures  praising the North Korean people, their nation and their glorious leader Kim Jong Un. What to say? It's propaganda at its finest. Along with this magazine, I received The Pyongyang Times (an English language propaganda newspaper), QSL card and order form to purchase DPRK postage stamps. Rather than display the magazine content, photo after photo, I compiled this video and recording of the  Voice of Korea radio interval.