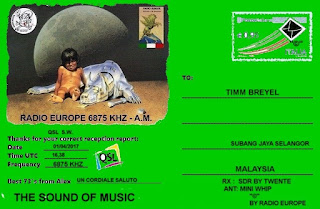 Radio Europe*, a free radio station based in Italy, was logged just before sign-off on 1 April 2017. A jingle mentioning "Japan", and the songs  "Call of the West" performed by Frankie Lane and an instrumental cover of "Strange Encounters of a Third Kind" were observed from from 16.30  till 16.38 UTC. Reception  on 6.875 kHz rated a SINPO of 34433 -- fair signal, audible content with occasional utility interference and fading.

Reception report was emailed on the same day. This eQSL and additional visuals were received on 16 April 2017. Thank you, Alex!

*Received using remote SDR receiver at the  University of Twente (The Netherlands).
Posted by T.L. Breyel at 3:10 AM