Voice of Pujiang (via Shanghai)

Voice of Pujiang, transmitting from Zhenru, Shanghai, People's Republic of China, was logged on 18 December 2011. Local pop music with intermittent station announcements in Chinese was observed from 12.00 to 12.35 UTC, but signal continued to be heard well after 14.30 UTC. Transmission was on 5.075 kHz. Reception (SINPO) was  23332  -- weak signal, some unidentified QRM, and slight fading, yet clear and audible speech and music. 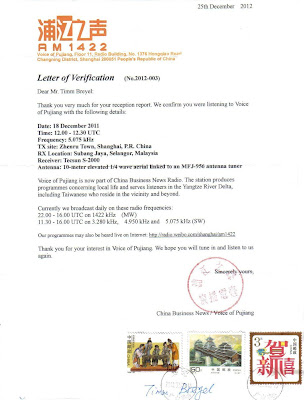 A reception report was posted by aerogramme shortly afterward. There was no response for over a year. Finally, on 21 December 2012, I received an email from  Mr. Victor Qian (Editor for China Business News/Voice of Pujiang) who explained why no QSL ever arrived.

Mr. Qian is now the veri-signer who issues QSLs for the Voice of Pujiang. So, I prepared the eQSL shown here and emailed my initial reception report back to him. He filled in the data and verified  the eQSL on the following day. No official stamp was marked on the eQSL, nor will any eQSL be issued with the official stamp, according to Mr. Qian. The official seal is reserved only for a QSL-letter, which is available for 1 IRC or US$1 (to cover postage). For complete details about how to obtain a QSL from Voice of Pujiang refer to this BLOG ENTRY,

Here is the aerogramme I posted over a year ago. Mr. Victor Qian noticed the South East Asia DXing blog site and my entry stating no QSL was ever received from the Voice of Pujian. He followed up, checking the archived letters at the station. Some reception reports as old as 10 years were filed away with my aerogramme. He discovered my email address and contacted me. What more can I say, except thank you VERY much for your dedication and interest, Victor!

I look forward to the promised QSL-letter with station's official seal in the near future. It arrived in the mail on 21 February 2013.