The last English language broadcasts of Radio Netherlands Worldwide were logged on 28 and 29 June 2012. 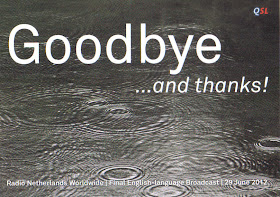 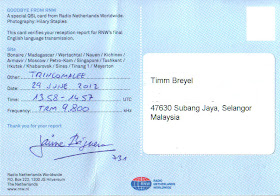 14.02 - One vocal song, followed by a Dheera Sujan narrating the history of RNW: "The Happy Station" hosted by Eddie Startz and  Tom Meier; Jonathan Marks was featured; Pete Meyer's "Asia Beat" was highlighted;  and the award-winning RNW documentaries were touched upon
14.19 - Dheera Sujan mentioned  RNW would continue on the Internet, then followed with interviews of various RNW producers and favorite programmes, i.e. its African service
14.31 - Instrumental music, then retrospective on RNW continued with a look at the  "Weekend Europe" and "Network Europe", then a song entitled "Good-bye My Love"
14.36 - Retrospective resumed with "Curious Orange" stories about Afghanistan, a prostitute and a robot designed for sex
14.43 -  Mary Hopkins sang "Good-bye My Love", followed by a look at "Earth Beat"
14.48 - Dheera Sujan presented favorite episodes from her 23-year repertoire with RNW, i.e. interviews with Indonesian liberators from Dutch rule, Australian outback, etc
14.56 - Announcement of thanks to listeners for 65 years and  last broadcast, followed by RNW station interval (the bells)
14.57 - Short-wave transmission ended...forever!

For a bit of nostalgia I used a Grundig Satellit 500 to listen to RNW's last English broadcast.
Reception reports were submitted online at RNW and emailed on both days. The QSL card for the Trincomalee transmission arrived on 20 July 2012; it came with an RNW sticker. Confirmation of the Tinang transmission arrived in the post on 24 July 2012.